Since today VersionEye has support for Rust security vulnerabilities. Altogether VersionEye is aggregating 8 security databases now. If a Rust package is vulnerable the security issue is showed directly on the Rust VersionEye page. Here an example: 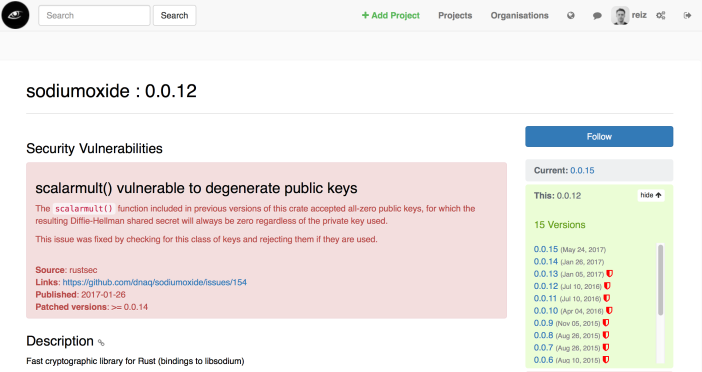 If VersionEye is monitoring a Rust project for you and one of your dependencies is vulnerable you will get notified via email.

Try out this new feature and give us feedback. We would love to hear from you.

Rust is a blazingly fast new language which guarantees thread safety! Our latest project, a command line tool to identify random components by their SHA values, is implemented in Rust. As we use Rust for our own purposes we want to track Rust dependencies of course 🙂 That’s why added support for Rust now! VersionEye is tracking more than 9K Rust packages from crates.io now and they are all available through our public search. 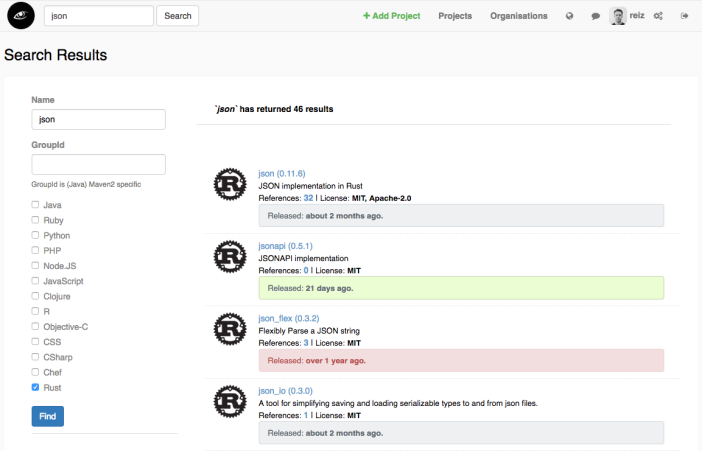 Beside that VersionEye can parse cargo.toml and cargo.lock files. If you are using cargo to manage your Rust dependencies then you can let VersionEye monitore those files to receive notifications about new releases of your dependencies. 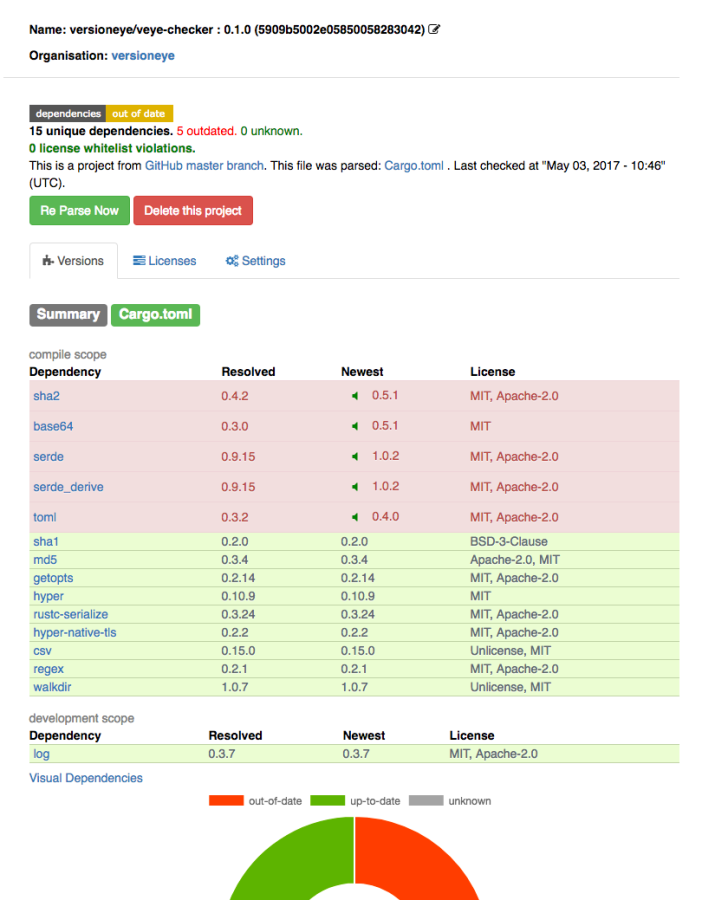 The above screenshot shows a Rust project which is monitored directly on GitHub.

This integration is still very fresh. Please try it out and give us feedback!

Nowadays its’ common to use package managers to describe, fetch and install 3rd party open source dependencies. But that was not always the case and there are many legacy projects out there in the Enterprises of this world there 3rd party libraries are stored in a “lib” directory without any documentation. It’s not a rare case that there are dependencies like a “beanutils.jar”. But which version is it? Which license does it have? Are there any known security vulnerabilities? Nobody knows!

The VersionEye API can identify such components by their SHA values. If you generate the SHA value for your JAR file and send it to the VersionEye API then you will get back the coordinates of that JAR file in Maven. That way you will know the exact GroupId, ArtifactID and Version of the component and based on that you can find out the license and known security vulnerabilities!

Of course it’s a lot of work to do that by hand, especially if you have a couple hundred files in your lib directory. That’s why we developed a command line tool to automate that. The veye_checker is implemented in Rust and we have binaries for Windows, Linux and Mac OS X which run out of the box! Simply download the binary from here, make the binary executable and run this command:

With “-a” you specify your API key for the VersionEye API. With “-o” you specify the output file. The default the veye_checker outputs everything as CSV to the console. The results is a CSV which shows you exactly the files, their coordinates in the corresponding package manager, their license, the number of security vulnerabilities and a link to their VersionEye page. Here a screenshot:

This is still a very early version of the “veye_checker”, but please try it out and give us feedback. We would love to hear from you!