77% of all our signed up users are coming from GitHub and they use VersionEye to monitor their GitHub repositories. For a while now there is a VersionEye service hook in GitHub which calls back the VersionEye API on every git push event and updates the corresponding project in VersionEye with the latest dependencies from GitHub. But now you can use VersionEye to test your changes directly in a Pull Request and see the results of those changes in the GitHub Pull Request UI. This way you can even enforce rules that would prevent a Pull Request merge if a dependency is blacklisted or it is flagged with a security vulnerability.

Given that GitHub is moving away from Service Hooks towards native WebHooks, we changed our integration to do the same. If you are logged in to VersionEye with your GitHub account you can simply click the link “Create from GitHub” and navigate to a repository where you will see all supported project files and the corresponding branches. To monitor a project file simply flip the switch directly next to it.

In the example above the Gemfile in the develop branch is monitored by VersionEye and it works like this: Every time a new project file is imported from GitHub, VersionEye will automatically create a web hook on that GitHub repository, which will call back the VersionEye API on each “git push” event and if the monitored files are affected, VersionEye will re-parse the files and update the view in VersionEye immediately.

The cool thing is that this also works with pull requests! Assume somebody is forking your project, adding new dependencies and sends back a pull request. In that case the VersionEye web hook kicks in and checks if some of the dependencies have security vulnerabilities or unknown licenses.  For those cases, VersionEye will respond to the pull request with  a “failed” status message  and you can see the result directly on the GitHub Pull-Request tab, like this:

By clicking on the “Details” link you can see a more specific report at VersionEye for that pull request. 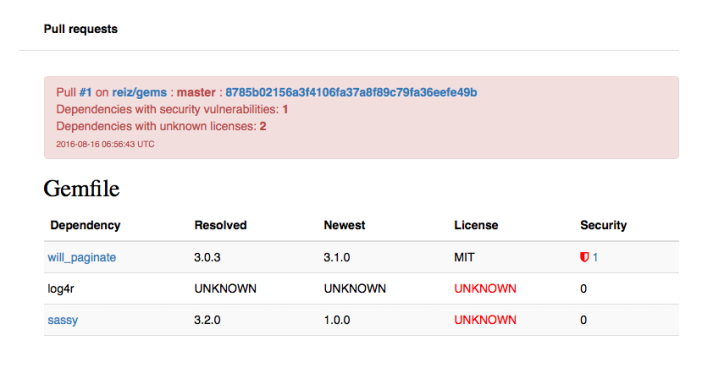 A report like this is generated on every new commit which is added to the existing pull request. It’s similar to a build at TravisCI. Now you can still merge the pull request if you like but at least you are informed about security vulnerabilities and license issues.

In the VersionEye UI you will find a new sub menu “Pull requests” in the organisation view. Here are all commits from all pull requests are listed which belong to your organisation.

The interesting part here is how VersionEye is combining dynamic and static analysis. Your project is checked for security vulnerabilities and licenses on each commit and each pull request but also regularly independent from that. Even if there are no commits and no pull requests for a couple days, VersionEye will check your project once a day by default and send you an email if a new security vulnerability was found for one of your dependencies.

With this new feature the developers are getting instant feedback to their changes. In real time the dependencies are analysed and the developers informed. That saves a lot of Time & Money. We think it’s important to run this kind of analysis as early in the development process as possible. If your software is already bundled and published to a binary repository it’s too late for this kind of analysis because your software might be distributed already to a high number of devices/clients. Run your analysis as early and as often as you can 😉

And by the way, that’s all open source 😉 You can run the software on your own infrastructure and it works well together with GitHub Enterprise 🙂

This is a pretty new feature. If you find a bug or you have some kind of feedback, simply open a ticket here.